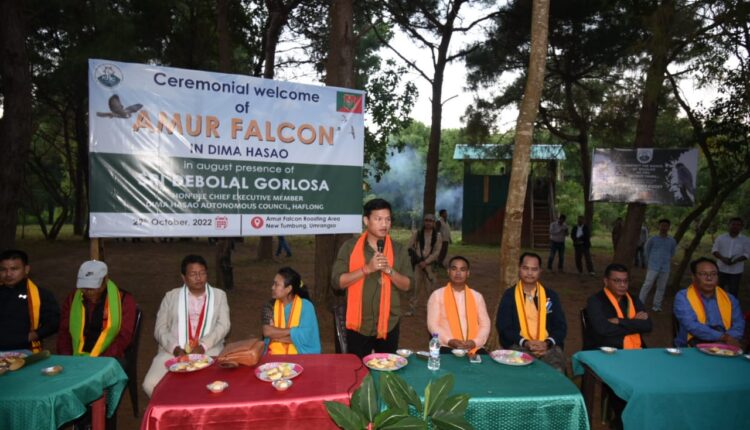 Welcoming the winged migratory birds in India at New Tumbung in Umrangso while on their way to winter in Southern and Eastern Africa, the Forest Department of Dima Hasao in association with North Cachar Hills Autonomous Council organised a programme today at the roosting site of the Falcon birds

This awareness programme initiated and attended by NCHAC Chief Executive Member, Debolal Gorlosa as chief guest saw many local organisations, local people and officials attending the meeting. CEM Debolal said that every year the winged guests come to this roosting site to take rest while on their journey to the other far off over Arabian sea, so it is the duty of our people to treat these guests with full care without causing any harm. These birds pass through in large numbers starting in the second week of October that lasts till November.

As a part of the awareness measures a mega event by name of Falcon Festival is held at the Golf course, few kms away from the roosting site where renowned artists are invited drawing a huge tourist footfall both local and from across the country. This year the Falcon Festival is scheduled to be held for three days on _15th, 16th and 17th December_ next.

Speaking during the occasion, NCHAC Chairperson Ranu Langthasa said how Dima Hasao is blessed to have such naturally beautiful locations in the district that is an amazement in itself. Inorder to preserve and maintain this beauty people will have to work in tandem with nature.

Local Member of Autonomous Council, NCHAC, Umrangso constituency Joysing Durong also spoke and said that a committee for preservation of the Falcon birds has been formed with the active local people. Umrangso MAC Joysing Durong will be the chairman of the committee. Others who spoke on the occasion was Chief Conservator of Forest Muanthang Tungnung, IFS who briefly spoke about the route of the migratory birds and what can be done for its preservation

It is to be noted that unaware people from the nearby villages earlier considered killing of these migratory Amur falcon birds as a local sport during this season. After persistent awareness from the department and local NGO by name Blue Hills Society, the sport was brought to halt. Gradually since 2015 after an active participation from the council esp. CEM Debolal Gorlosa, this season of the roosting site of Falcon birds between October -November is largely promoted as a tourists season. Ever since tourists from different places, wildlife enthusiasts are seen visiting the place thus making this as a popular tourist spot.