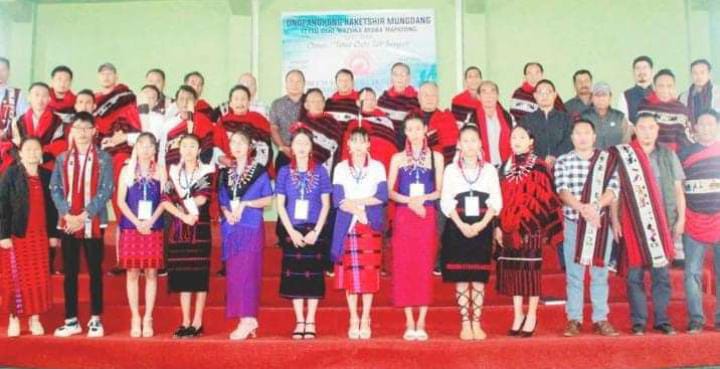 Under the initiative of Ongpangkong Students Conference ,the third edition of Tetsu Oshi Wazuka Ayuba Mapatong 2021-2024(awareness on preserving Ao language) under the theme Tetsü Oshi Tali Senputi roughly translated as Embracing Mother Tongue was held at Multi-purpose hall, Khensa village, Mokokchung on November 8.So far two phase of the competition has been held online due to pandemic lockdown.the third phase of the competition was Ao Slam Poetry and it was held among students from various villages under the Ongpangkong range in Mokokchung district.we need to protect our language
Dr Rongsenchiba, General Secretary, Ongpangkong Conference was the special guest in the inaugural function. Dr Rongsenchiba stated that in order to promote and preserved our identity,culture, tradition and custom we need to protect our language.to protect our language we must be able to read, speak and write in one’s own language, he asserted.Meanwhile, he cautioned that our language might be taken over in the future by foreign languages if we weaken our language citing the usage of other foreign names to refer to a landmark instead of using the forefather’s given name of each landmark.Ao language listed as endangered Sashimeren Jamir, convener of Tetsu oshi Wazuka ayuba Mapatong 2021-2024 in his speech cautioned the gathering that Ao language is listed in the endangered language according to experts.in this regard, he called upon the students to get a glimpse of how our world is moving ahead and how we should adapt with the changing world by preserving and promoting our language which identifies one’s identity.Short speeches were also given by nekmi longkumer, AKM General Secretary and Imtitoshi, Chairman, Khensa Village Council.