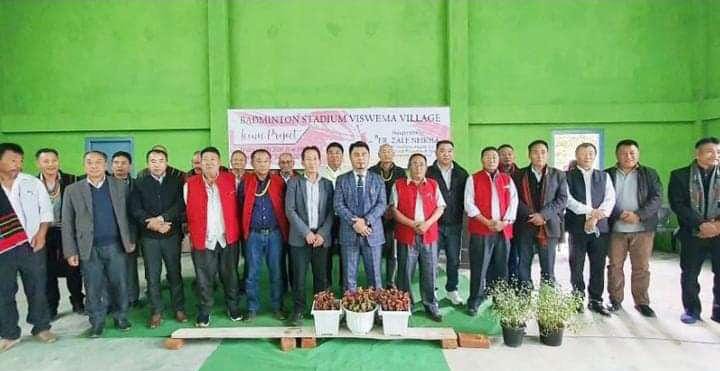 Nagaland youth Resources and Sports, Advisor Er Zale Neikha inaugurated Viswema badminton stadium at Phu, Viswema under Kohima district on October 25.this stadium was constructed under LADP 2020-21 under Iconic Project.Speaking on the occasion, Er Neikha called upon the villagers to continue to maintain mutual understanding and strengthen the bonds of unity and peace. Where there is peace and unity, developmental activities take place smoothly, he said and called upon the villagers to uphold such principle for all round development.He said that development is a continuous process and assured to attend to the needs and requirements of the populace of the constituency.He thanked the villagers/supporters for their unflinching support in the last 2018 elections and also appealed their continuous support in 2023 elections too. He exuded confidence that NDPP/BJP partners will come back to power and Neiphiu Rio will take the affairs of the state government again as the Chief Minister. In this, he sought the support of the electorates to remain faithful to the present government to access the various developmental activities.Meanwhile, Er Neikha informed that the formal inauguration of Kezoma Urban Station has been finalised and the same will be graced by Chief Minister Neiphiu Rio on October 28 at 10:30 am at Kezoma Stadium. He sought the mass participation of the public to the programme to celebrate the fruits of development within 15th Southern Angami-1I Assembly Constituency.earlier, the programme was chaired by Meyiel Naleo, chairman, Zheri Panchayat while welcome address was delivered by Khruseho Pucho. Pukul Kennao presented the project report of the construction Viswema Badminton stadium, which involved Rs 45 lakh. Vote of thanks was proposed by Mevüsetso Kennao, GB Zheri Panchayat.the programme was followed by exhibition match wherein Er Neikha too joined the same.