“Rongali Utsav” celebrated with traditional fervour by GAEF and Shilpisewa 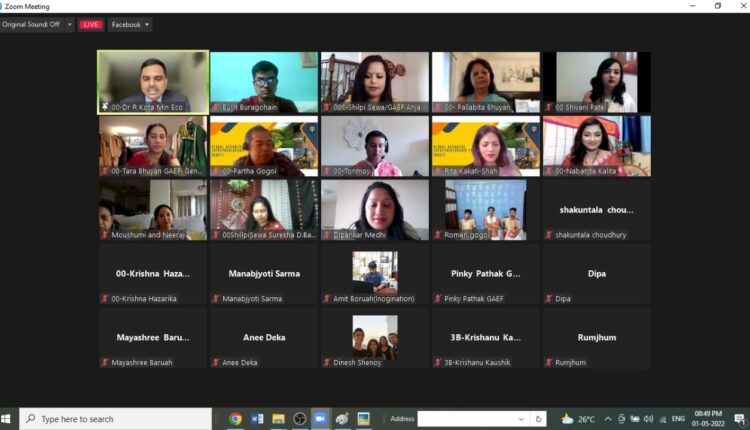 On 1st May,2022 Rongali Utsav was celebrated with traditional fervour by Global Assamese Entrepreneurship Forum (GAEF, https://www.facebook.com/groups/440248043822192) in association with Shilpisewa (www.shilpisewa.com ) through online mode in zoom and Facebook live. Anjana Bordoloi General Secretary, GAEF USA and Founder of Shilpisewa welcomed everyone with the heartiest gratitude and she expressed how important to keep own culture and roots alive. The show was anchored by Tanmoy Bhagawati and Nabanita Kalita . Dr . Ravi Kota , Minister of Economic, Embassy of India shared his views along with rongali wishe . Shivani Patel from Canada did fantabulous singing even after being away from the roots for long but still so rooted. Followed by Ramen Gogoi and his teams Folk Musical instruments performance was enthralling. Surekha Deka Baishya’s voice added more colours to the show. Moushumi Gogoi’s dance on Bihu beats making audience equally thrilled. Ashwin Hazarika born and brought up in USA, performed song in the show who is deeply in touch with his roots even after staying in USA. Barnali Kalita could not present but she sent her recorded songs to play in the show. Nilutpol Bora, one of the well-known artist of Assam based put of Mumbai shared how important it is to be disciplined when one belongs to the field of Art and Culture. It is a taboo spread which demands an artist to behave like a Gypsy, dress like a messy person and so on. He also gave examples like Shankar Mahadevan’s disciplined life. Few songs were performed by Nilutpol Bora.The event was concluded by Partha Gogoi , President GAEF with his vote of thanks .