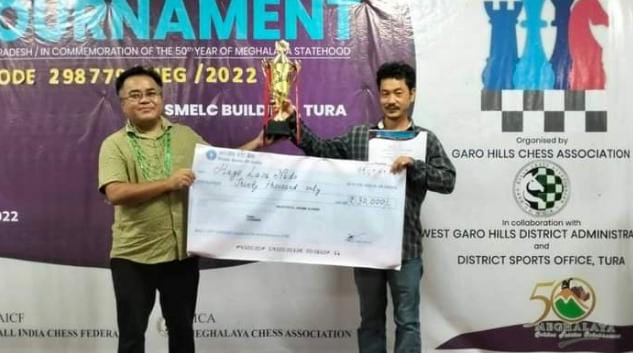 The First ever FIDE Rated Chess Tournament for the players of Meghalaya and Arunachal Pradesh under the aegis of FIDE World Chess Federation concluded on Saturday at SMELC Building, Dakopgre, Tura. The tournament which started from 3rd October to 8th October, 2022 was organized by the Garo Hills Chess Association in collaboration with the District Administration, West Garo Hills, District Sports Office, Tura and Meghalaya Chess Association, Shillong.after a week-long play of Classical Chess where the players get at least 1 and half an hour per person to make the moves and following the Swiss League system of 9 rounds, Hage Lassa Nado ranked first in the Open category followed by Dupit Tabu and Barbith Sangma in the second and third place respectively.The weeklong FIDE Rated Chess Tournament was conducted by Th Biju Singh, International Arbiter, Arun Singh, International Arbiter, Taba Anam, International Arbiter, Ravi Kant Tiwari Senior National Arbiter and Amar Bhandari, Senior National Arbiter who also completed his 3rd Norm and is now a Fide Arbiter.The Project Director, DRDA and Additional Deputy Commissioner, West Garo Hills Dolrich B G Momin while gracing the occasion as Chief Guest on the concluding day of the function, congratulated the association for organising this prestigious tournament for the chess players as well as the participants and parents for taking part in this FIDE Rated Tournament. He further informed that the district with the initiative of the West Garo Hills Deputy Commissioner, Swapnil Tembe has created a Chess Arena in D C Park, Tura which is one of a kind in the world and drawing the attention of many chess lovers from the State and beyond.

Sharing his personal experiences as an ardent chess lover, he said that he had learnt a lot from the game and encouraged others to give their best and not to underestimate your opponent. He also assured all possible help to the GHCA for organizing more tournaments in future adding that the Chief Minister, Conrad K Sangma had also extended his consent and financial support for the same.In his remark TH Biju Singh, the International Arbiter and Chief Arbiter of the FIDE Rated Tournament informed that the total number of participants was 102 players from Meghalaya and Arunachal Pradesh including 26 rated players and some players from Garo Hills were able to get Fide ratings by participating in the tournament. The different categories in the tournament for the players were under 12 and under 16 for both Male and Female players, Veteran and an open category.The winners of under 12 Male Category were, 1st Baiyangsrang M. Sangma and 2nd Saldo Angku M Sangma and 3rd Nikman G Momin and under -16 Male category winners are 1st Anubhav Sharma, 2nd Arano Rrikrim G Momin and 3rd Chuesa Sangma.The winners of under 12 Female category are 1st Cheaha Nikgame G Momin, 2nd Amaziah Gapesa Ch Marak and 3rd Veronia Severa S Sangma while under 16 Category Female winners are 1st Amamya Cherikra K Sangma and Special prize to Joana John Marak.jigo Josam was adjudged the Best Veteran, Salchi Sangma the Best Woman player while Princestar Sangma the Best Unrated player. Moreover, Rijied Katrai was adjudged the Best player from Khasi hills, Silseng Marak from Garo Hills,Gautom Rabha from Jaintia Hills and Tachung Dupit from Arunachal Pradesh.