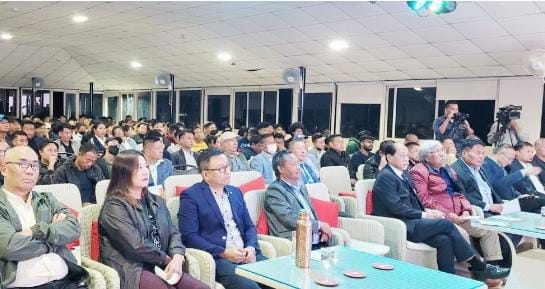 Nagaland Chief Minister Neiphiu Rio today announced that a special incentive will be given to the medal winners of Nagaland team at the forthcoming 2nd North East Olympic Games 2022 in Shillong.the state Government will be giving a cash award of Rs 50,000 as special incentive for those winning Gold, Rs 25,000 for Silver and Rs 10,000 for Bronze, he informed.Going to the North East Olympic will be a launching pad for each one of you and opportunity for you to grow from there,he said while speaking at the special programme organized for the state contingents at Hotel Vivor, organized by Nagaland Olympic Association (NOA).The 2nd North East Olympic Games 2022 will be held at Shillong, Meghalaya, from November 10 to 16.

We trust you. We believe in you and we want you to do well, said Rio, who is also president of NOA, and assured that the government is committed for them.He said that the State government will be constructing new indoor stadium as well as astro-turf in all the districts of Nagaland.he said that NOA has been trying to make renew efforts to promote sports to the higher level.Rio also stressed on the need to use the created infrastructure in proper manner.he also assured that the government will continue to facilitate trainings, coaching and also establish Academy to promote various disciplines.Sport is not a part time job. It is a full time job, he said and called upon the sportspersons to work hard and excel.we are good and talented but we don’t maintain consistency, he said adding that they will do well if they are committed.300 plus Nagaland contingents Meanwhile, the NOA Secretary General, Abu Metha informed that a strong 300 plus Nagaland contingents, comprising athletes, officials and coaches will move for Shillong from November 8 onwards.