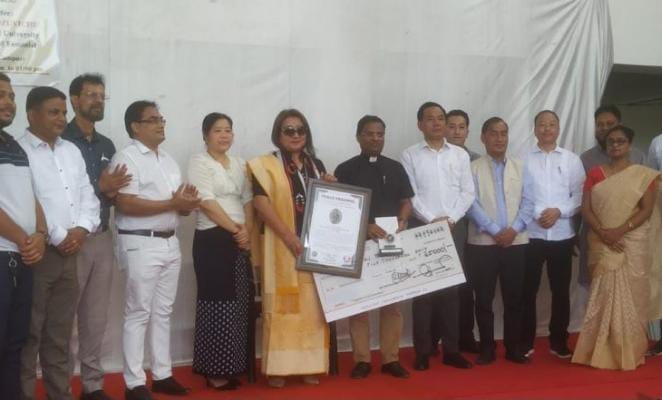 Receiving the award in front of students and eminent personalities including commissioner of police, Dimapur,Rothihu Tetseo, Who was chief Guest for the event, Dzuvichu stated that she accepted the award together with the members NMA as the peace building efforts were not just of an individual but concentrated.Dwelling on what peace should mean, Dzuvichu,who is also the advisor of Naga mother’s Association and co-convenor of PR and communication,GNF, said that peace isn’t only about silencing of guns but also about gender justice and justice in regards to militarisation.she appealed to leaders of the state as well as the Government of the day to recognise the efforts of Naga women in peace building.

She reasoned that when the voice the woman is not heard, peace becomes unsustainable, thereby making gender justice important and the gender sensitivity a need.she expressed Happiness over the fact that the municipal election in the state is happening with 33% reservation for women and cited that the reservation for women isn’t a concept that originated in India but rather in the west and women leaders in the west today are results of reservation.she expressed hope for a positive future of Nagas, while mentioning that there are leaders who are indulging in tribalism and don’t want peace.It may be mentioned that in 2011 , she had initiated a litigation which led to the 33% representation of women in urban bodies in Nagaland.

Talking about discrimination, Naga society and racism, Dzuvichu said that Nagas are still in colonial hangover, upholding the accounts full of errors written by those not connected to Nagas.However, she said, many Naga scholars today are rewritten the history.she also blamed the colonial hangover for Nagas becoming recist ,citing that anything that has to do with the west and the white are perceived by Nagas as superior to other and thought Nagas complain about racism, they too are racists towards others.
She asked for a change of attitude towards the non nagas living in the state, some for generations,and to respect people of other communities and religions,adding that they are more charitable comparing to nagas who await directions from churches.she also stressed on the need to see nagas across borders as one.
Earlier,CP, Dimapur, Tetseo noted in his remarks that in the year 2021, Nagaland reported a total of 1503 criminal cases, out of which 743 were registered at Dimapur, accounting for more than 50% of the cases. In Dimapur ,he claimed that 200 cases out of 743 cases had been reported to the east police station,demonstrating that individuals were primarily concerned with financial power, syndicates and business revalries , when the date are shared with the MHA,he said, the state tops the list for vehicle theft and extortion.

In addition to development and security, Tetseo emphasised that peace the need of the hour, he lamented that there is a lack of trust among nagas , the presence of isms and too many NGOs, and yet there is no platform that where all the Naga tribes are united.despite being such a small community.nagas , according to him, still has many differences.in his address, he urged students to practise, acquire and be truthful in order to contribute to a peaceful community and added that one who doesn’t have peace within him/her,he/she cannot give peace to others.he also urged everyone to be aware of the significance of their names since the better off society will be if everyone behaves in accordance with the names meanings and the expectations of their parents.he said that only when the power of love overcomes the love for power, the society can have peace.the programme was held on the theme “End Racism (Discrimination).build peace”.