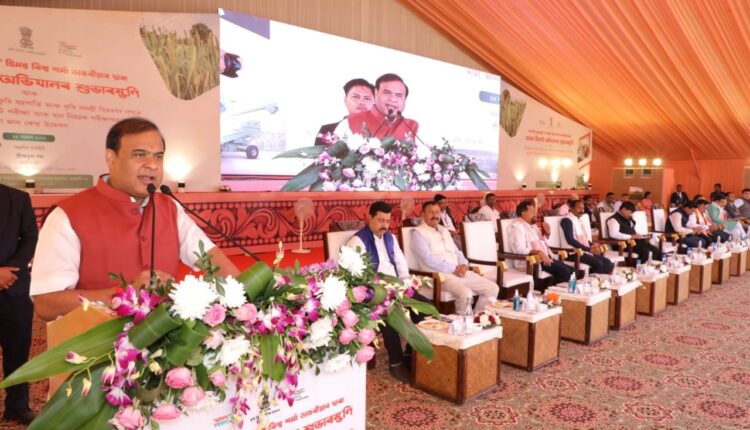 The chief minister said that the mission has been launched in synergy with prime minister’ aim of atmanirbharta . With the launch of the Millet mission, the famer’s of Assam can diversity their cropping practices and other than conventional crops ,they can extend their famining to grow millets mission which in the beginning will be practised in 2500 hectare crop land. subsequently it will be extended to 50000 hectare of farm land in the state.he also said that the knowledge centres he inaugurated today will help the famer’s of the state to gain knowledge and handholding about millet famining . he informed that in the coming days 96 more knowledge centres will be set up across the state under rural infrastructure development fund for quantum leap in agriculture production.

Specifying his government’s initiatives for the welfare of the faming community, chief minister Dr.sarma urged upon the farmers to take the advantage of mission Basundhara 2.0 and convert the status of their lands to patta land.he also informed that from next year.his government has set the MSP for paddy at Rs 2040 per quintal.he therefore, asked the famer’s to sell their paddy to the government.he also said that the subsidy government is helping the local youth to set mills and other agri infrastructure.chief minister Dr.sarma also asked the famer’s to plant trees of different varieties example sal,agar etc around their farm land which besides giving them commercial benefits will also mark as demarcation of their lands.he also asked them to diversity in palm faming moreover, considering the huge demands of lemon,bhut jolakia,joha rice ,he asked the farmers to grow these crops abundantly to become economically self sufficient.he also asked them to be judicious in their farming practices and help the state in stating a new revolution in agriculture,he also talked on the necessary of making Assam self sufficient in milk, poultry, fish,egg etc and government intervention to give a new lease of life these sectors. minister agriculture Atul Bora while speaking on the occasion gave a brief outline of the schemes of his department for the growth of agricultural.he thanked the minister for leading the way in helping the agriculture department to launch defferent schemes for the welfare of the famer’s and growth of agricultural production.additonal chief secretary agriculture asish bhutani gave welcome speech in the programme which was attended among others by panshayat and rural development minister Ranjeet Kumar Dass, minister for public health engineering etc jayanta malla Boruah, minister for tea tribe welfare sanjay krishna,MLA Dispur Atul Bora, chairman Assam State agriculture marketing board manoj Boruah, progressive famer’s and host of other dignitaries.