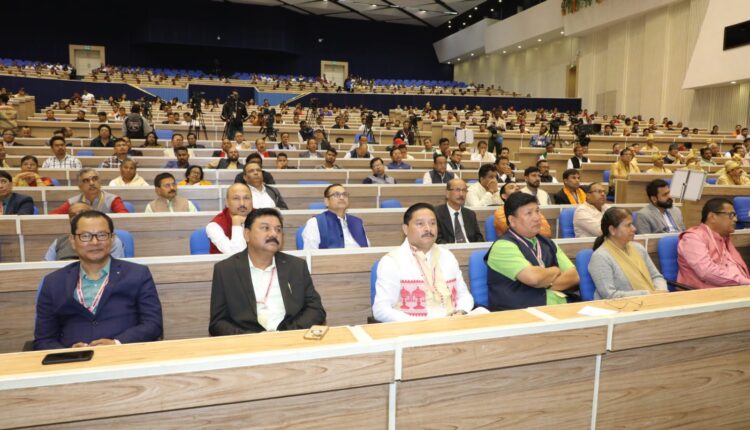 The discussion focused mainly on the negligence suffered by regions like Assam, Northeast and other areas away from Delhi in the so called mainstream history or historiography of India. One of the panelists, Vikram Sampath deliberated on this negligence that reasons like Assam and Northeast or South India have been suffering in the so called mainstream historiography of India. Substantiating his view he mentioned that in India young generations grow with the stories of Bhakhtiyar Khalji’s military expeditions but unaware of his humiliating defeat in Kamrupa in the hands of King Prithu. He also referred to the appreciation, the indomitable spirit of Ahoms in Alamgirnama, an important Mughal historical document.

Dr. Sangita Gogoi in her speech spoke at length on the tradition of history writing and other socio-cultural superiority of the Ahoms compared to other societies of their contemporary India.

Sharing his views, Chandraprakash Dwivedi said that Barphukan ascended to Dolakaxoria Barua, Ghorabaruah and then to Barphukan with the duty of driving away the invading Mughals from the western frontier of their sacred homeland. There are many stories like Lachit in India which are still to be told through books, films and other popular culture, he added.

Prof. Rajib Handique in his speech talked about several sons of Assam who deserve special mentions for their contributions but still ignored in Indian historiography to a large extent. The distance of Assam and Northeast from Delhi may be one of the reasons of such negligence, Prof. Handique added. He also appreciated Suryya Kumar Bhuyan’s laudable effort in bringing Lachit Barphukan’s life and works to the forefront with his monumental work on the Ahom general.

Noted film maker Rajesh Kumar Singh spoke at length about organizational skill of the Ahoms where the common people were everready to participate in a battle as soldiers whenever there was a need.

It may be mentioned here that the year 2022 marks the 400th Birth Anniversary of Vir Lachit Barphukan and Government of Assam decided to celebrate it with a year long program. The celebration was formally inaugurated by the President of India on February 25, 2022. One of the major objectives of this celebration is to make national and international audience aware of the life and works of the Ahom general of 17th Century. Prime Minister of India Narendra Modi will grace the valedictory function of the celebration as Chief Guest on November 25.