Grateful to people of Assam for their wholesalehearted cooperation CM Dr. Sarma. 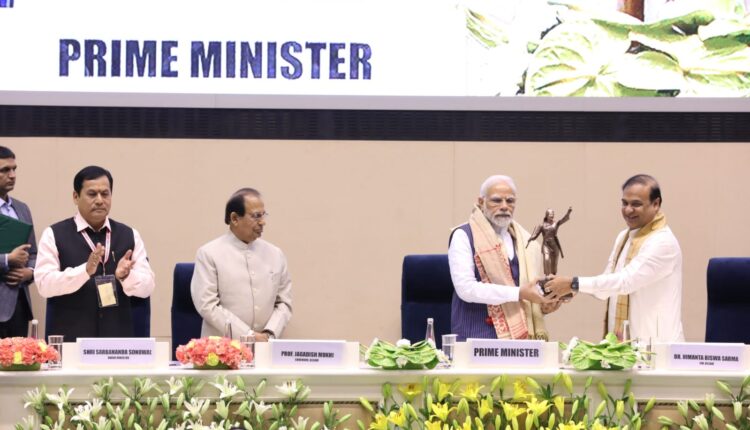 Prime minister Narendra Modi on Friday attended as chief Guest the closing ceremony of the year long celebration of the 400th birth anniversary of 17th century ahom Army general Lachit Barphukan held at vigyan Bhawan in new Delhi. congratulating chief minister Dr.Himanta Biswas Sarma for successful conduct of the 3-day celebration in the national capital, the prime minister exuded confidence this would prvov decisive in ensuring Lachit Barphukan’s sage of courage,valour and patriotism don’t remain limited to the boundaries of Assam alone but spread across lengths and breadths of the nation.the prime minister stated that for ages, there,has been a conscientious attempt from certain quarters at portraying the history of India as that of defeat and surrender Attempts at celebrating the saga of unsung heroes such as Lachit Barphukan is going to prove fruitful in undoing the ham the distorted history telling has caused to the pride of the Indian citizens the prime minister assented. suppressing the self esteem of the Indians were an agenda of the colonial British regime and distribution of history was one the means to further it ,the prime minister said , adding all must now come together to ensure history is presented in its truest sense. Referring to Lachit as the greatest patriot of era who continue to inspire all to dedicate their lives towards protection of national honour, the prime minister said Lachit motto of nation first is exactly the motto on which the new india is being administered.

Expressing his gratitude to the prime minister for his continued and never ending support in the government of Assam’s endeavours for the state and its residents,the chief minister said his presence today would be extremely helpful in transforming Lachit into a household name across the country like that of Chatrapati shivaji . the chief minister exuded confidence Lachit would be accorded his rightful place in historical discourses in days to come ,as more and people are introduced to the valour of the great general.the chief minister started that had it not been for Lachit, the present geopolitical and cultural identity of not assm alone but that of the entire southeast Asia would have been very different from what they are today.the chief minister expressed hope the 400th birth anniversary celebration of the great mediaeval era warrior in the national capital would be a significant step towards drawing the attention of current generation intellectual and historians towards Lachit. The chief minister aiso expressed his gratitude towards the people of Assam for their wholesale support and cooperation in the year long celebration culminating in its conclusion today. Assam governor Jagdish Mukhi, union minister of ports, shipping and waterways sarbananda Sonowal, Assam minister of information & public Relations pijush Hazarika, Assam legislative assembly speaker Biswajit Daimary, members of parliament Ranjan Gogoi and Tapan Gogoi were also present at the event.