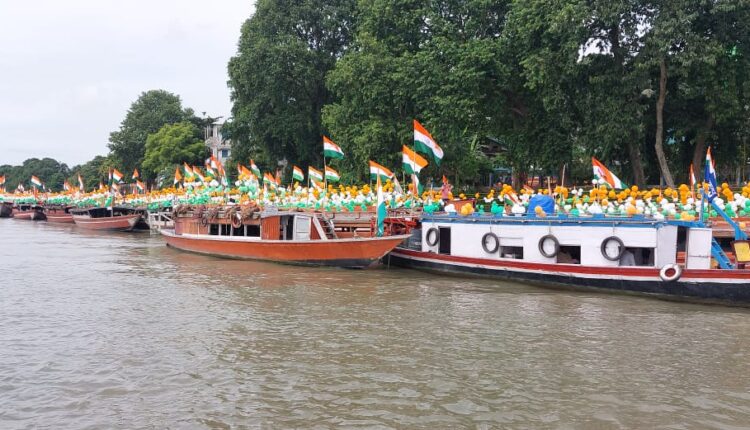 As a part of ‘Azadi Ka Amrit Mahotsav’ Dhubri district administration has organised a Tiranga Boat Rally on Mahabahu Brahmaputra in collaboration with Dhubri Police and BSF.In line with the completion of 75 years of India’s independence, a boat rally was marched from Dhubri Kachari Ghat to Chalakura Char with well-equipped 75 numbers of boat and return to Lachari ghat.

The 61 Kms of Border area in District Dhubri, Assam where River Brahmaputra enters into Bangladesh is consisting of vast char lands and innumerable river channels, a daunting task.

The Deputy Commissioner, Dhubri Anbamuthan MP took the initiative of the boat rally to aware thousands of people living in Dhubri’s Char area to celebrate the 75 years of India’s independence along with celebration of Azadi Ka Amrit Mahotsav.

All the 75 machine boats were designed with tricolour flags and balloons, which creates an spectacular view and jaw dropping atmosphere in the river Brahmaputra in Dhubri on the starting day of Har Ghar Tiranga programme.